As you can see from the below topology that on the left-hand side of an L3 router we have internet connectivity meanwhile on the right-hand side we have a subnet A with network id as 12.1.1.0/24 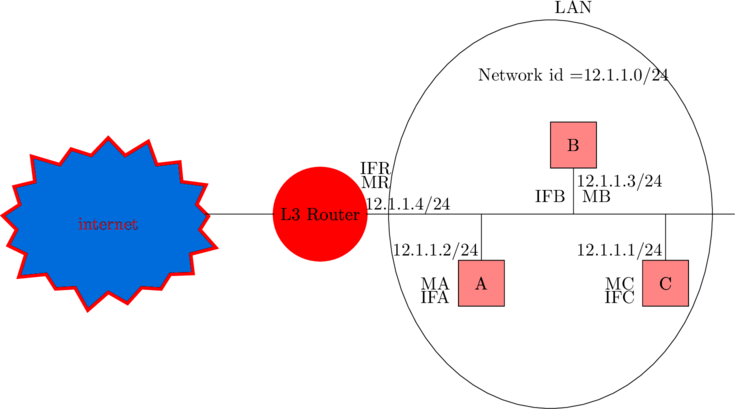 From the above topology, the L3 router has a physical interface (IFR) which host subnet  A, and subnet A host three machines A, B, C

So,  when can we say a set of machines are present in local area network(LAN)

Therefore, we can say that the machines A, B, C from the above topology forms a local area network(LAN)

Because it satisfies the above two conditions

As you see the host machines A, B, C, are in the same subnet and they are connected to the same physical wire

Remember: LAN is an outdated technology and VLANs has taken over it 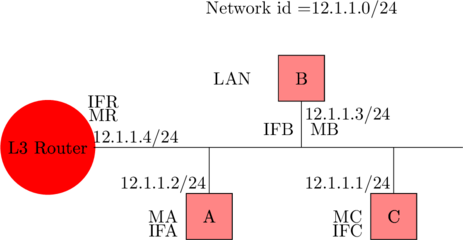 The first drawback that we have with LAN  is immobility

So, what exactly does that mean?

As you can see from the above topology that we have an L3 router with one physical interface(IFR) which have a subnet whose network id is 12.1.1.0/24, let us call this a local area network

The LAN in the above topology contains three host machines A, B, C

If you would like to move machine A into a different subnet then you need to change the IP address (12.1.1.2/24)which is configured on machine A

Suppose if you changed the IP address of machine A to 13.1.1.1/24 then machine A will not fall in the same subnet therefore wrong configuration occurs

Moving the machine physically means you need to re-cable the wires to place the machine in a different subnet, And also Re-cabling the network will be a big problem for a network administrator

Moreover, L3 routers  are expensive and have a limited no of physical interfaces,

Finally, LANS won’t have the flexibility to move the host machine from one subnet to another subnet without requiring to re-cable the entire network

So, the problem arises, when all the visitors are connected to the same physical LAN then they would have equal access to library resources unless restrictions are made per user level

Finally, the library management doesn’t like to grand permission or privileges to the resources for  temporary visitors which library usually grand to regular employee

Vlans solves the problem of Lans immobility and security

Moreover, Vlan is a Layer 2 concept that can be implemented by using an L2 switch

So, for example, consider the below topology where Vlan allows machine A to be in subnet P meanwhile the machines B and C reside in a subnet Q

So, with the help of Vlan both the subnet performs logically different functions 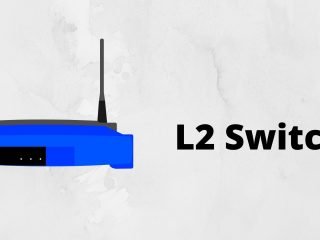 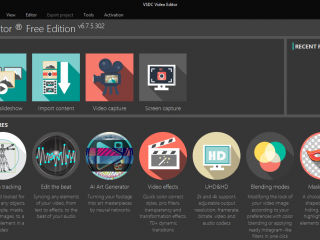 Next Post (n) How to use VSDC video editor